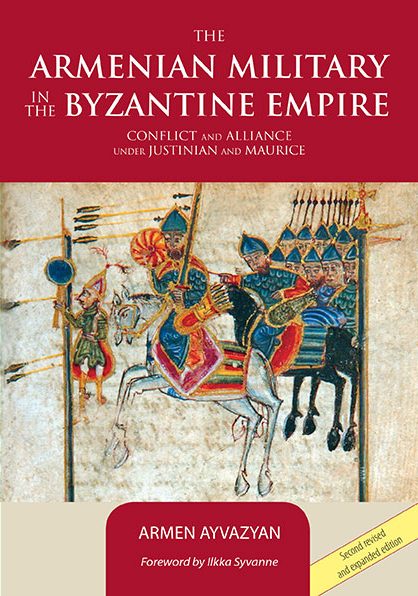 This book brings to light one of the least known, yet most turbulent periods in the history of the Armenian military and its complex relationship with the Byzantine Empire. In its first part, Armen Ayvazyan embarks on a military-historical analysis of the Armenian uprising against Emperor Justinian’s government in 538-539. While revealing and evaluating various tactical elements and stratagems employed by the Armenian forces, he carefully considers earlier and later evidence regarding their military operations, including both conventional warfare and high risk missions such as targeting killings of enemy commanders-in-chief and assassination plots against the heads of colonial administrations.

And in the second part, Ayvazyan examines the Byzantine attitudes towards the Armenians and their armed forces, revealing, inter alia, that the underlying source for continuity of the anti-Armenian images with the analogous Roman tradition of prejudice was essentially geopolitical.

Dr. Armen Ayvazyan’s small, yet dense study of Byzantine, Armenian and Iranian military relations is a pioneering piece of scholarship, indeed capable of triggering a renewed interest by Western military historians into the too-often ignored Armenian material.
Dr. Ayvazyan has managed to perform an almost impossible task. He has demonstrated that, despite the perceived paucity of the relevant historical evidence, it is still possible to arrive at a completely new, well-substantiated and plausible reconstruction of the Armenian rebellion in 538-539.

Dr. Ayvazyan is the author of:

The Armenian Church at the Crossroads of the Armenian Liberation Movement in the XVIII Century (2003);
Mother Tongue and The Origins of Nationalism: A Comparative Study of the Armenian and European Primary Sources (2001);
The Code of Honor of the Armenian Military, 4-5th centuries (2000);
The Armenian Rebellion of the 1720s and the Threat of Genocidal Reprisal (1997)
… and other books and articles.
See also Dr. Kaveh Farrokh’s website

Dr. Farrokh is a world renowned expert in the field of Iranian studies. He is especially notable for his research on the Iran/Persia military history. Kaveh teaches ancient Persian history at the University of British Columbia’s Continuing Studies Division, and is affiliated with a number of world-renowned organizations, including the Hellenic-Iranian Studies Society, The Iran Linguistics Society and Stanford University’s WAIS (World Association of International Studies) program.

The Armenian Military In The Byzantine Empire
(2nd Ed.)