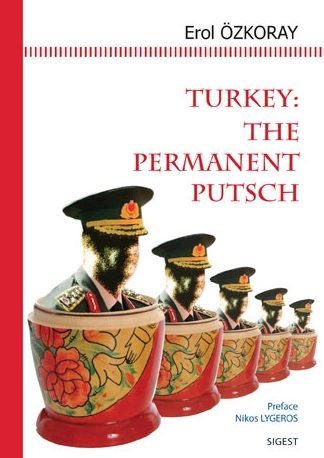 Turkey’s political regime is at present the most anachronistic and most archaic of all Europe. It is a “insidious totalitarianism,” in which the true power is exercised by the Turkish army. Several institutions, such as the National Security Council, in which members of the military sit, have as their goal the control and censorship of the civilian government. This regime, born of the military coup d’état of 1980, is based on the constitution of 1982 in order to place the power of the military on a firmer footing. There furthermore exists a secret pseudo-constitution called the National Security Policy Document, which enumerates the inviolable red lines for the Turkish state, including the Kurdish problem, the Cyprus issue, and the Armenian Genocide. No solution to these major problems is possible in this system where the military reigns as master. This schizophrenic regime, where elected officials do not hold the true power, is characterized by the author as a regime of “permanent putsch” or “permanent coup d’état.” The process of accession to the European Union plays a large role in the political normalization of the country. In this context, the Ergenekon trial against the putschists of the Turkish army is the first break in dismantling this power. However, much more remains to be done.

Erol Özkoray is the first journalist/writer to have defied the Turkish army as an intellectual. In 2000, he stood up against the power of the army, which blocks democratization and prevents Turkey’s entry into the European Union. The army general staff took him to court, and lost in all of the fifteen cases it initiated against him. His lynching by the press preceded those of Hrant Dink and Orhan Pamuk, Nobel Laureate in Literature. The Armenian journalist Dink was assassinated in January 2007 upon the orders of the Turkish “Deep State,” which is nothing other than the general staff, and Pamuk took refuge in the United States in order to save his life. Özkoray lives in Istanbul and Paris.

Preface
Introduction
Schizophrenic Regime
The Permanent Putsch
Ergenekon: The Turkish Army Caught in Flagrante Delicto
When the Exception Becomes the Rule
Legitimization of Power: A Strategy of Crises
The Red Lines of Power
The Origins of Totalitarianism and Fascism in the Turkish State
Militarization of Civilian Life
The Tyranny of the Media
The End of the Fourth Republic
Political, Cultural, and Ethnic Fractures
Endnotes